In order to be able to use the pbm client effectively, we need to configure the Petabridge.Cmd.Host to listen for incoming connections on a reachable IP address and port. The Petabridg.Cmd.Host will bind to 0.0.0.0 by default, which should be a safe choice that can work for both local use (localhost) and remote use (some reachable IP in your network.)

Like most parts of Akka.NET, Petabridge.Cmd.Host is configured via HOCON.

As you can see, the HOCON required by Petabridge.Cmd.Host is pretty simple. All of these values will be provided by default even if you don't add this HOCON to your ActorSystem's startup HOCON configuration. But if you want to override or customize any of those values, make sure you add the petabridge.cmd section to the root of your configuration.

If you'd like to have your Petabridge.Cmd.Host settings picked up automatically via your App.config or Web.Config, you can do this by simply adding the Akka HOCON configuration section to your app.config, like so:

Once you have that added, you can add in the HOCON section to your App.config and include any settings you wish to pass onto Petabridge.Cmd.Host there:

By calling PetabridgeCmd.Get you will get a reference to the Petabridg.Cmd.Host itself, and this method will always return the same PetabridgeCmd instance for the same ActorSystem.

If your network setup was successful, you should see the following line appear in your Akka.NET logs:

Petabridge.Cmd.Host's default values should be able to work in any environment, but if you need to modify those values then this section is for you.

When your pbm clients need to be able to connect to remote Akka.NET hosts, such as ones running in a data center or an on-premise test environment, you need to ensure that both of the following are true:

NOTE: We do allow you to set petabridge.cmd.host with a DNS hostname, and that hostname will be resolved to an IP address and bound by the socket (since TCP and UDP don't natively support DNS). However, you will (deservedly) receive an angry warning message from the Petabridge.Cmd.Host if you do this, because 99/100 times binding a socket to a DNS does not work. In order for a socket to be able to bind to a domain name, that domain must be resolvable to the machine's local IP address.

Connecting the pbm to Petabridge.Cmd.Host

Once you've configured your PetabridgeCmd plugin to run on your Akka.NET application, you can now connect to it via the pbm commandline via the following syntax:

From there you'll receive a confirmation message if you were able to connect successfully. 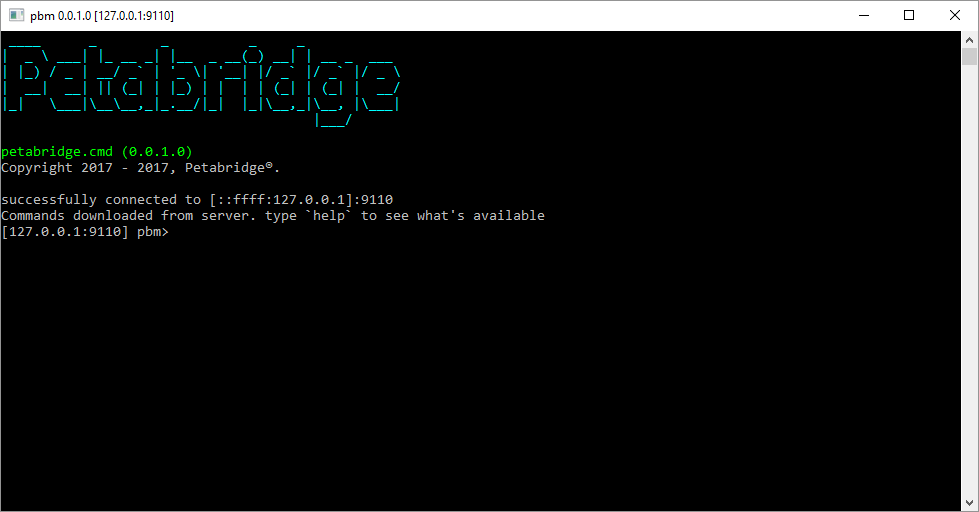